To Sell or Not to Sell Accounts Receivable 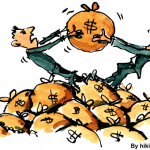 In a transaction between a seller and buyer of a healthcare practice, assets are usually a main factor in the negotiation of the deal.  Equipment and real estate are simple enough trades to understand, however, an asset like accounts receivable is treated differently and comes with its own set of perks and liabilities.

Thomas Anthony, attorney, Chairman of the Healthcare Practice with the law firm of Frost, Brown & Todd explains that in healthcare, accounts receivable are an asset that is usually collected on a time delay basis.

“Meaning, you perform services today, the bill is typically submitted to an insurance company, and the insurance company will pay later.  If the medical event has something to do with trauma, the payment for those medical bills could take a year or two.  Sometimes you have very long time frames associated with collecting accounts receivable,” Anthony says.

Judith A. Eisen, partner with the law firm, Garfunkel Wild, adds that accounts receivable is an asset that is a payment due from third parties.  Mostly, accounts receivable comes from payors like managed care companies, Medicaid and Medicare, Eisen says.

“When talking about accounts receivable financing there is self-pay, which is the amount due from patients themselves (e.g., co-pays).  A lot of receivable financings will not include self-pay because it is a very different type of collection process that you go through and it is less attractive to many lenders,” Eisen says.

Eisen explains that in the transaction, the determination of who keeps accounts receivable can go either way.

“They either have to acquire your receivables so that they have cash coming in, or they have to get some kind of working capital loan to subsidize them until they can get their own receivables.  There is a lag period between when the receivable is generated and when you actually collect on it.”

Christina Van Vort, partner at Garfunkel Wild adds that the decision to acquire the accounts receivable as a buyer can obviously impact the purchase price at the end of the day.

“In a stock sale, accounts receivable would automatically be transferred because the purchaser would be stepping into the shoes of the seller. We don’t see a lot of stock sales.  In general, asset sales are more common.  It’s just a negotiated point,” Van Vort says.

Art Gambill, partner with McGuire Woods LLP says in such negotiations, the agreement between the parties will be reflected in a purchase agreement or “Operations Transfer Agreement”.

Anthony provides an example of accounts receivable when put in the context of a transaction.

“What that does, is it creates a timing difference.  So, when it comes to the accounts receivable, the first thing you have to do is sort those out.  In the example, group one could sell those accounts receivable to group two, and group two could include money into their purchase price for those accounts receivable.  If group two does that, they have to take into account the probability that those receivables will actually be collected.  There are people who won’t pay, bills are sent to the wrong address, or insurance companies deny….there are all kinds of things that can affect the collectability.”

Anthony says there is another important piece of the issue that has to do with provider numbers.  In Medicare and Medicaid programs, all medical providers have a provider number; that provider number attaches to their contract, and the contract has an attachment known as the conditions of participation, Anthony says.

According to Anthony, when a buyer comes into a transaction, they have the option of buying the seller’s provider number, or not.

If the seller wants to sell its provider number to the buyer, the buyer can come in, take over the facility, and after the acquisition date, can continue to bill for all services rendered at the facility uninterrupted.  This is because they have stepped into the shoes of the seller, Anthony says.

“They have the seller’s provider number and they can keep going using the existing arrangements with no interruption of the billing or the cash flow,” he says.

The reason people don’t want to do that is, if a buyer buys the provider number of a seller, the buyer automatically assumes all of the seller’s liabilities, Anthony explains.

“If the seller made an error in billing, the buyer gets stuck with that.  Also, if the seller made an error in billing that was intentional, like fraud, the government is not only going to demand the money back, but could impose fines and penalties that can be between 5 and 11 thousand dollars per bill.  So, when the buyer thinks about taking over the seller’s provider number, they have to know that they automatically get any potential liability that the seller has.  Any group that is going to go in and buy the provider number of the seller, has to do extensive and deep due diligence, and have a high level of confidence in the seller’s billing to make sure they don’t take on liabilities that could be disastrous,” Anthony says.

Gambill says another risk is that in some circumstances, if there is a court order directing Medicare or Medicaid to make payments directly to an assignee of the receivables that can cause that assignee to become responsible for certain types of over-payments that the provider would have otherwise been responsible for.  That’s the principal downside.

Anthony explains that in these situations there are also tax responsibilities that rest on the side of the holder of the accounts receivable.

“Similarly, if the seller does not sell the accounts receivable, keeps them and collects them later; then they are going to be taxed on those receivables when they get the money as long as they are a cash basis tax payer.  If they are an accrual basis tax payer, then they will pay it when accrued.”

Anthony adds a third issue to consider is, if the seller does not sell the asset, but instead sells the ownership, stock, or the corporate entity itself, as oppose to selling the asset; then the total purchase price they get from the buyer is probably going to have some elements of capital gain in it.   The seller could reduce their tax liability by doing a stock sale instead of doing an asset sale.

“There is a lot of exceptions to the rule about stock sale, but the general rule is you can enjoy capital gain treatment, which is better tax results for the seller if they do a stock sale,” Anthony says.

“The bottom line is, most transactions of this type are asset deals, because the buyer doesn’t want those potential liabilities associated with assuming the seller’s provider number.”